“Water, water, every where,
Nor any drop to drink.”

I’ve written before about threats to the quality of rivers such as the Murray and the Daly due to overconsumption of their resources.  These stories are plastered across most media sources, so it is easy to assume that most people are aware of the same issues.

However, you realise this is not necessarily the case when you listen to local/regional radio channels, read regional newspapers or come across promotional material from regional political representatives.  So many people lack basic level education in the disciplines that describe natural processes (mainly science and geography).  How do they have the authority to make statements about these natural processes that influence and affect entire communities?

The recent release of the Murray-Darling Basin (MDB) draft plan has raised the roof off most regional towns within its catchment.  People are angry and abusive, yelling at MDB officials, writing letters and ringing up radio stations.  They are being goaded by local political members (and wannabe members), media tarts and resident pot-stirrers.

Understandably, things are going quickly downhill.  People under the age of 50 are ringing up the local ABC radio station and suggesting rash ideas like building pipelines joining the Thompson River (in central Queensland) to the Murray, because all the water from the former is “just running out to the sea”.  I just checked my calendar…it is 2010 after all, not 1950!

One of the larger registered political parties has set up an online petition claiming “It’s just not fair!” that the Environment gets more consideration than “economic and social factors”.  One of the federal members for a Murray River-based seat has been actively corroborating this view in media, local papers and websites.  Her views, littered with exclamation marks and dramatic phrases (as well as spelling errors), claim that the clawback of necessary environmental flows from irrigation channels is an act of “sabotage”, causing entire towns to die.

Current observation, knowledge and scientific proof can argue the opposite—that the development of irrigation in the Basin was the act of sabotage that has driven this River to its current state.

Recent research by the CSIRO has found that because many rivers rely on groundwater for their base-flow in dry periods, surrounding land uses that pump large quantities of groundwater are subsequently reducing the recharge to that river.  Combine this with water pumped directly from the River itself, and poor old Murray is getting dehydrated pretty quickly. 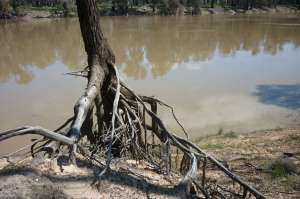 The human need for drama and sensationalism overrides the need for the Truth.  If those that nominate themselves as “voices of the people” educated themselves on natural processes and the human ecological niche, before speaking out, their words would be more reason than rhetoric.

Instead of encouraging dramatic, sensationalist views based on small bubbles of spatial arrogance, we should be educating the huge variety of water users within the Basin on water wastage–leaking pipes and dams, unmetered riparian rights, irrigation during rain and flood etc.

The ‘Environment’ is not separate to, nor isolated from, human society.  We live IN the Environment.  A rescinded right to suck a river dry will not cause a town to die…in fact the opposite would be more true. 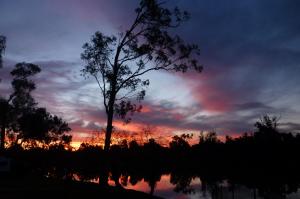 One thought on “An Albatross around their neck!”