Mistletoe has fascinated me since I was a child. At first, its charm was purely mythological – I spent many years obsessing over the European Christmas traditions I was missing out on by having a midsummer yuletide in subtropical Australia. Mistletoe, holly wreaths, snow angels, and warm eggnog – these things didn’t exist in my sweaty Queensland Christmases. It wasn’t until I was much older that I learned what a remarkable plant mistletoe is, and found out that it grew in Australia (as does holly, albeit as a weed!). I was beside myself. I still remember my excitement the first time I saw a mistletoe plant, flowing serenely off a eucalypt branch in the Bunya Mountains, like a leafy green waterfall suspended in mid-air. Mistletoes come in all shapes and sizes, and all have an unearthly beauty which belies their parasitic tendencies. Australian mistletoes are also extraordinary in their ability to mimic their host tree’s morphology. In Celtic tradition, the mistletoe was a symbol of eternal life, fertility and love, probably because of its inexplicably evergreen presence in the grey, dormant trees of a northern winter. Just the other day I saw what I assume was a recently-dead eucalypt standing stark and alone in the middle of a paddock, its branches adorned with huge pom-poms of dark green mistletoe – I can imagine that such a striking image would have been even more dramatic when stumbled upon inside a misty, Celtic wood! Many people have an ambivalent attitude towards mistletoe. Some put in a lot of effort trying to remove infestations from forests and nature reserves (in an attempt to stop infested trees from dying), not fully realising that such extreme, single-tree infestations occur because of the unrelenting land-clearing and fragmentation we create. Happily, the mistletoe’s environmental importance is beginning to be understood. Research over the last few years has uncovered evidence that the plant is much more salubrious than its ecological niche implies. A study published in September by David Watson and Matthew Herring followed on from one of the first long-term experiments conducted in mistletoe-prone systems. The authors found that mistletoes are an essential resource for maintaining (or even increasing) biodiversity in woodland ecosystems of southern New South Wales, and they also discuss how similar results have been found in other studies of mistletoes or parasitic plants. Like every other piece in the ecological puzzle, mistletoe is intricately linked with the other players in its habitat. Numerous bird and animal species rely on the plant for fruit, nectar, pollen, shelter and nest structure. The leaves that fall from mistletoes also provide litter ‘diversity’ to the wood’s leaf litter carpet, which in turn draws in greater diversity of litter-loving arthropods (which in turn will attract more arthropod-loving birds). Watson & Herring’s experiment found that removing the mistletoe from some woodlands caused local woodland-bird diversity to decline in those patches, while woodland-bird diversity in mistletoe-present patches increased over the same period. The potential knock-on effects of these changes are pretty obvious. Life begets Life. So it seems that the Celtic symbolism of mistletoe’s life-giving properties weren’t entirely off-track – it’s not just humans that have been kissing under the mistletoe for centuries. Happy midsummer or midwinter, wherever you are, and I hope you are looking forward to the glorious New Year! 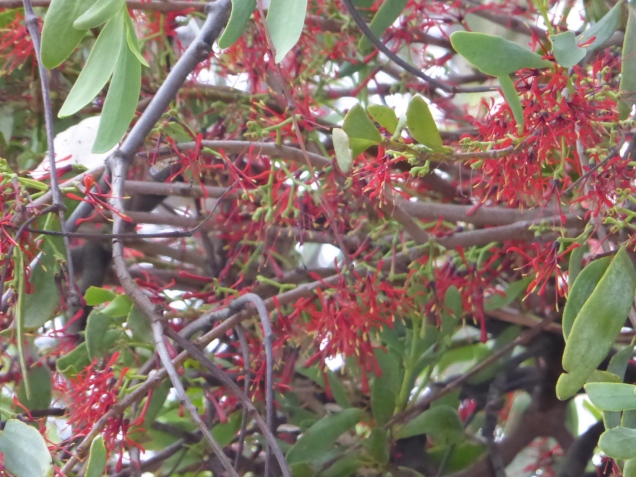