Spring has definitely sprung in the small patch of remnant native vegetation behind our house. The tiny scrap of remaining woodland jammed between McMansions, the freeway and an industrial block is glowing with golden wattle, mauve chocolate lilies and tiny scarlet & yellow peas. Last week, my eye caught an odd blaze of purple amongst the russet, green and gold – an exotic garden escapee swaying quietly in the breeze.

It was late afternoon when I found it, and the normally star-shaped flowers had closed into cosy bells. I noticed a commotion around some of the flowers and discovered they were crammed with little clusters of solitary bees, seeking shelter for the night. 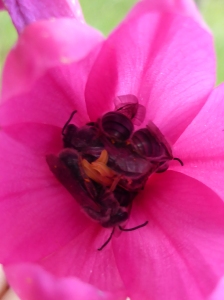 I checked a week later, again in the late afternoon, and the bees were still there. But at midday the next day, the hot pink flowers were open flat, in their characteristic daytime star, and the bees were gone – busy foraging on native peas, golden everlastings and my kale plants.

Evolutionary relationships between insect and flower colour traits have long intrigued pollination ecologists. Insects see the world quite differently to humans. Honey bees are generally thought to go for UV blue colours, flies tend to prefer white or yellow, while wasps and beetles often go for red. Numerous studies have tried to pinpoint the best trap colour for catching pollinators, although it’s clear that ecological context also plays a role in what colours pollinators go for under different conditions. But, in general, blue and yellow colours are generally touted as ‘the’ pollinator colours, and there are plenty of theories on why.

Most insects are pretty sensitive to cold. That’s why we rarely see solitary bees and wasps flying around in winter. But it’s not just the weather outside that affects pollinators. Some of them don’t like drinking cold nectar either, which is why most pollinators (outside tropical regions) start foraging after the sun rises and flowers have warmed a little. Different nectar concentrations warm at different rates, and different insects have different tolerance thresholds, which makes for some interesting plant-pollinator interactions.

So how does colour fit in? If you wore a black shirt on a hot summer’s day, you would be sweating buckets more than your friend wearing a white top. Similarly, darker-coloured flowers will absorb more heat, and thus be hotter during the day, than lighter-coloured flowers.

The common belief that bees prefer blue/purple flowers comes with a couple of caveats. Firstly, most of the studies or observations for this are based on honey bees or bumble bees from the northern hemisphere. Secondly, a lot of these studies have been lab-based preference experiments, so contextual ecological influences may not have been picked up. In contrast, many field-based trap colour studies have found higher pollinator catches in white or yellow traps, and you just have to look out your window to see how many pollinators are buzzing around your yellow and white flowers.

Of course, some species have shown a preference for purple flowers in various contexts. Here in Australia, the blue-banded bee (Amegilla spp.) is a favourite with native bee aficionados. I saw my first one a couple of years ago in my backyard. It flew into my garden, made straight for a purple-flowered Hebe shrub, and then disappeared over the fence again. It was about 10.30 am when I saw it, and it returned every day for the next week or so around the same time and did the same thing. I had plenty of other white and yellow flowers in the garden, but it was only interested in the Hebe. A local bee naturalist told me a similar story of a blue-banded bee’s morning visits to purple flowers in her friend’s garden. Perhaps morning is the best time to visit blue/purple flowers, before they have become too hot to handle?

Bees and other pollinators associate warmth with floral colour, and this determines their choice to visit a particular flower at a given time. However, much of the research and discussion over this has considered these interactions from a foraging perspective – which colour flowers do bees prefer to feed on. But what about sheltering?

I’ve been checking the purple flowers in my backyard for over a week now. During the day, the flowers are open for business, but the bees aren’t interested. At night, there’s not enough room inside the corollae for them all. Similar observations were found in dark- and light-coloured irises in the Mediterranean. The darker irises were not visited at all during the day and were exclusively pollinated by the male solitary bees that used them for shelter over night…and because they warmed up quicker than lighter flowers in the morning, they offered a warm nectar reward first thing in the morning to keep the bees coming back at night.

8 thoughts on “Goldilocks or Sapphirelocks? The ‘just right’ flower colour for solitary bees”