Science and humanities are often segregated in education and professional development. Even as a personal interest, the two disciplines are usually considered incompatible. In reality, they are complementary. Imagine if all science degrees included core humanities subjects in the first year? How would scientists, and science, benefit from a basic humanities perspective? This series looks for answers in some of the most common humanities disciplines.

Mentioning the word ‘humanities’ in a room full of scientists is pretty risky. For some scientists, there is a stigma attached to the study of ‘arty’ subjects. The process of research and inquiry in classics, history, literature and anthropology is very different to the scientific method. Yet neither approach is wrong, both are equally creative, and both have the ultimate goal of discovering and sharing knowledge. Having studied and worked in both disciplines, I can’t see any way that one is more rigorous than the other. But there is a huge difference in the way that most students are educated in each discipline. Humanities courses, in particular, are often better at teaching students how to write.

Science is about generating and sharing knowledge to build our collective wisdom. So communicating the results of scientific research is a core responsibility of a scientist…something that has become a bit of a topical issue. Experts of various disciplines have been sharing great ideas through blogs, popular science media and academic journals on how scientists can communicate more effectively. However, the majority of these pieces focus on communication as a practising scientist, i.e. after graduation. Far less attention is given to how communication skills can be enhanced prior to starting a science career by top-down initiatives at the education level.

The value of studying humanities subjects has been recognised for medical degrees (e.g. here, here, here), but has yet to filter down to other sciences. Although, some ecologists do recognise that interdisciplinary understanding of cultural, historical and social nuances of the study system can add a valuable dimension to many research projects.

This is the first in a series on how studying humanities can be useful to scientists. As I was writing this post, the dynamic ecologist, Jeremy Fox, posted this blog on the death throes of ecology bloggers. Thought-provoking, and definitely worth a read if you write or read ecology blogs. So I’ve delayed my first instalment to discuss his post instead, as it gives a great introduction to the theme.

A number of interesting hypotheses for ecology-blog-death were mentioned in Fox’s post, the comments on his post and this response blog from science communication PhD candidate Paige Brown Jarreau. Some of the hypotheses are probably valid. However, most of them considered the ‘present’ for ecology bloggers – why they do or don’t blog, what they blog about, who they blog to, how they fit into the blogging scene etc. None of the hypotheses considered the ‘past’ – the educational context of the discipline that inspires blogging. Many non-scientific academic disciplines have a very active blogging culture – Jeremy names economics as one; but literarians, historians, antiquities/classics researchers, sociologists and archaeologists are all over the blogosphere too.

So what makes ecologists different? Maybe they don’t blog as much as academics in other disciplines because writing is simply not the focus of an ecologist’s training?

I looked at course structures for Bachelor of Arts (General history) and Bachelor of Science (Ecology) from the University of Queensland, University of New South Wales and Australian National University. Caveat for data-lovers: this sample is not indicative of the whole world. But I’m confident you will find similar results if you repeated this analysis with more humanities/sciences comparisons and more universities. I chose these universities because they are in the top 5 ranked Australian universities* and they all had course outlines (including assessment details) posted online. I collected a total of 99 history courses and 88 ecology courses and I specifically looked at the number of longform written assessments per course (from now on just ‘essays’, but this includes essays, journal papers, and structured reports based on critical arguments) and the total contribution of essays to the student’s final mark. See below** if you want details of the methods I used to collect and analyse the data. 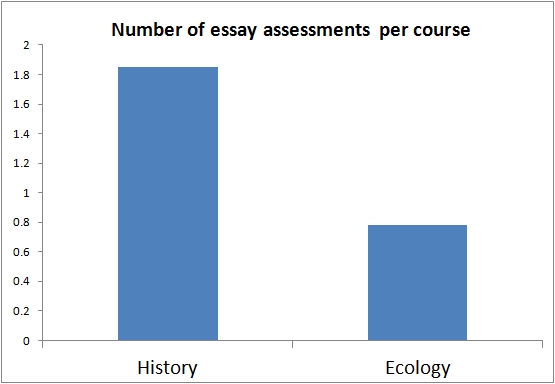 In history courses, the number and grade contribution of essays didn’t differ between introductory or advanced courses. But for ecology courses, students did more writing, and were expected to produce better quality of writing, in advanced courses…despite the fact that they had developed hardly any longform, critical writing skills in their first year. 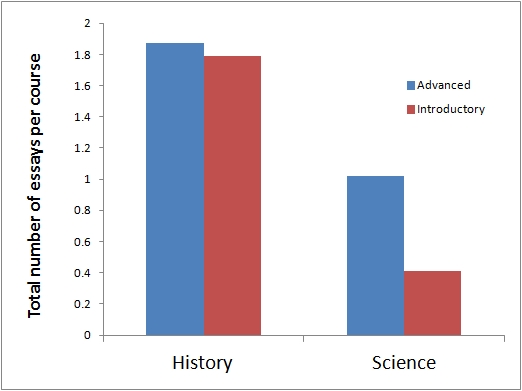 A content analysis would reveal more clues here. For example, out of the science courses, I noticed that the courses that contained more essays were generally more aligned with humanities contexts, like environmental management and scientific philosophy. Also, humanities course lists tended to include more interdisciplinary courses (e.g. environmental humanities, or big history) than the science course lists.

Blogging is one of many forms of popular science communication. But at the end of the day, it is also a written genre. So what disciplines are best at teaching the contexts around written genres?

*Disclaimer: I also did both my undergraduate degrees at UQ.

**Data from each course outline were obtained on: (i) if the course was compulsory or elective; (ii) if the course was a foundational (first year) subject or an advanced subject; (iii) how many pieces of individual longform written assessment (LWA) were included in the course; and (iv) the total percentage contribution of all LWA to the student’s final mark for that course. LWA was defined as essays, papers, articles or reports greater than 500 words that required literature research, critical analysis, discussion, and construction of a complex argument. Short answer quizzes, group assignments, practical components, field reports and laboratory reports that entailed simple documentation or analysis of data without in-depth discussions were not included. Field-based courses were not included. Differences in means were determined with t tests.

10 thoughts on “Humanities vs Science: is writing a dying art?”