We all get concerned when politicians don’t care about science or the environment. It affects every one of us.

There is no single ‘best’ way to lessen the gaps in the science-policy-public triangle. Most people think the onus is on scientists to communicate. Yes, scientists should engage outside their peers a bit more, that’s a given (and scientists doing great ‘scicomm’ is happening more than many realise!). But communication is a two-way relationship. To communicate science effectively, scientists need to be met halfway by an audience that understands and respects what they do and how they do it.

In Australia, scientists are being increasingly told that if their work is not commercially relevant, they are a burden on society. Encouraging scientists to find their commercial hidden story is all well and good, and some researchers may genuinely benefit from this. But it doesn’t benefit science overall.

Why? Much of the process of ‘doing’ science is not actually commercially relevant. The development of hypotheses, laws, principles, theories and conceptual frameworks essential to each specific sub-discipline doesn’t produce a multitude of banknotes for scientists to roll in hysterically en masse. Do we expect teachers, police, lawyers, and doctors to be ‘commercially-relevant’ to society? When science becomes more ‘relevant’ and ‘customer focused’, it becomes industry. This is useful for some, but not for society as a whole.

So why is the expectation squarely on scientists to build all these bridges across troubled waters?

These graphs show the pre-parliamentary career sector of most current major party (Liberal, Labor & The Greens) Members of Parliament (MPs) (it’s not the whole Parliament, but you get the idea). This information was found on each MP’s official webpage. 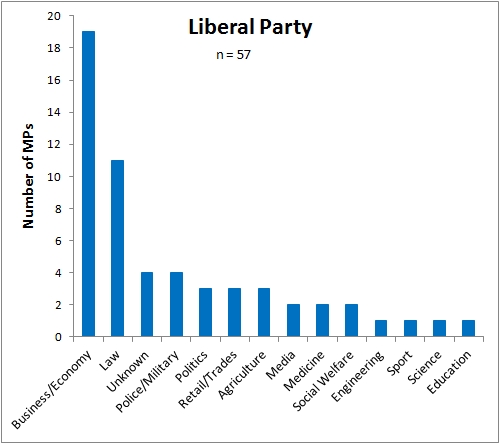 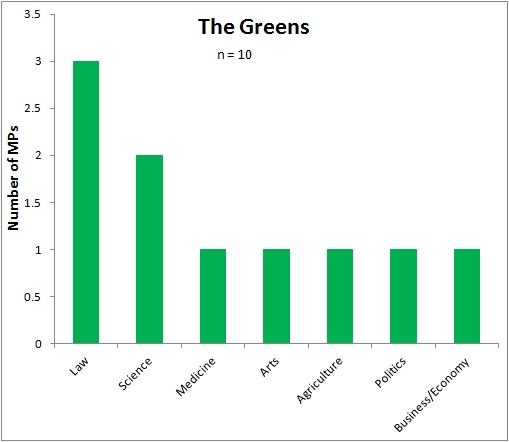 So ‘Business’ is the predominant sector knowledge in the current halls of parliament. But in the business sector, ‘research’ means product development, identifying consumer satisfaction, and reducing the ‘time to market’ timeline. In science, ‘research’ is a totally different kettle of fish. The ‘product’ of Science is Knowledge, which benefits society far wider and longer than a new gadget or technology.

Science is an infinite knowledge-building system. But there is no value for ‘knowledge’ in the current state of affairs. Election terms are three years, even though there are very few three-year plans that can apply to science with meaningful results. Science is complicated and it takes a long time to do. Three years may be an eternity in Parliament, but it’s just a few months in Science. And a blink of an eye on Nature’s calendar.

So how to lessen the ‘gap’ and help politicians and other non-scientists understand how science, research and academia “work”? The ‘Science Meets Parliament’ annual event has been claimed as a huge step in the right direction. But here’s the thing. The event is held in Canberra during a sitting week, which means most members of Parliament are already in town (a rare event). In contrast, any scientist that wants to go, needs to make sure the funding & diary stars align – which is a rare event for most scientists, especially early career researchers. So who is the event really benefiting?

Imagine the tables are turned. Where politicians could take time off from their busy work schedule to do work experience in a scientist’s lab. They could spend a few days there, doing field trips to collect fly larvae out of rabbit carcasses, identifying birds on a transect survey, sifting and analysing soil samples, recording species in vegetation plots, trying to find the scrobal sulcus on a 5 mm bee specimen, or deciding on the most appropriate analysis for a multi-species functional traits dataset.