Every year, I get to share my birthday with these guys: 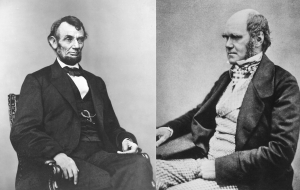 I’ve been mildly obsessed with both of them for years, for obvious reasons. But it was only recently that I discovered their early contributions to the land-sharing/land-sparing debate, something directly relevant to my own work. Darwin’s ecological legacy is well-known, but how often do we consider Lincoln’s impact on environmental history?

Abraham Lincoln and Charles Darwin were born on February 12 1809, a few hours apart, on opposite sides of the Atlantic Ocean. It’s a sign of the times that they never met and were hardly aware of each other’s work.

The coincidences between their lives are a fascinating read on their own, including the fact that both Lincoln and Darwin were reluctant to be associated with their respective legacies, Emancipation and Evolution.

Lincoln was never recorded to acknowledge Darwin’s existence, but he had been impressed by Chambers’ early theory of evolution (a bit more speculative than Darwin & Wallace’s later works). Darwin was an ardent abolitionist, but apparently made only one indirect reference to Lincoln’s work (on signing the Emancipation Proclamation), in a letter to Asa Gray.

Lincoln is sometimes named as one of the ‘top green US Presidents’, mostly because he signed the Yosemite Grant Act, creating the first national park in US history. He was reportedly persuaded by stunning landscape photos of the region, so he obviously appreciated nature’s intrinsic values. He is also given the credit for founding the National Academy of Sciences and the US Department of Agriculture, but his only real role in their formation was signing on the dotted line.

Interestingly, historical records suggest that Lincoln wasn’t a huge fan of agriculture, despite being remembered as a key supporter. He came from a pioneering family, not a farming one. As historian Earle Ross puts it, “He was the man of the axe rather than of the hoe, and never of the reaper.”

Despite his aversion to farming, he did seem to be a fan of intensive agriculture (i.e. land-sparing), although he probably wouldn’t have defined the concept as we do now.

In 1859, a year before he was elected President, Lincoln gave a speech at the Wisconsin State Fair. With the perspective of hindsight, it’s a fascinating read.

To set the scene, the industrial revolution was still in nappies. Steam power and machines were like smartphones: new, exciting, full of promise and bursting with opportunities. In their wildest dreams, neither the fairgoers, nor Lincoln himself, would have imagined the looming Dust Bowl years (which, ironically, were largely driven by Lincoln’s Homestead Act in 1862), peak oil, pesticide pollution and climate change.

Probably unintentionally, Lincoln makes a strong case for natural history. He argues that every farmer should pay more attention to the environment around them and pursue “cultivated thought” (education) in the sciences.

… no other human occupation opens so wide a field for the profitable and agreeable combination of labor with cultivated thought, as agriculture… Every blade of grass is a study [as are] soils, seeds, and seasons, hedges, ditches, and fences, draining, droughts, and irrigation…saving crops, pests of crops, diseases of crops, and what will prevent or cure them, [livestock], trees, shrubs, fruits, plants, and flowers — the thousand things of which these are specimens — each a world of study within itself.

A capacity, and taste, for reading, gives access to whatever has already been discovered by others. It is the key, or one of the keys, to the already solved problems. [And] it gives a relish, and facility, for successfully pursuing the [yet] unsolved ones. The rudiments of science, are available, and highly valuable. Some knowledge of Botany assists in dealing with the vegetable world — with all growing crops. Chemistry assists in the analysis of soils, selection, and application of manures, and in numerous other ways. The mechanical branches of Natural Philosophy, are ready help in almost everything; but especially in reference to implements and machinery.

But at the same time, he calls for farmers to “push the soil up to something near its full capacity”. This isn’t a comment on fertiliser application; his call-to-arms seems to be a forerunner of the modern land-sparing argument, where cultivation is concentrated intensively on a small footprint of land, supposedly to protect biodiversity on the unmanaged areas.

Lincoln’s argument for intensive cultivation is simultaneously valid and invalid. We now know that vast monocultures are not good for conservation or food production. Broadacre mono-cropping philosophies are what destroyed the Great Plains 60 years later, and continue to create environmental problems today.

But we also know that intensive soil cultivation, even at small scales, can increase erosion and reduce soil fertility, facts that are echoed in Lincoln’s next comments.

The ambition for broad acres leads to poor farming, even with men of energy. I scarcely ever knew a mammoth farm to sustain itself; much less to return a profit upon the outlay. I have more than once known a man to spend a respectable fortune upon one; fail and leave it; and then some man of more modest aims, get a small fraction of the ground, and make a good living upon it. Mammoth farms are like tools or weapons, which are too heavy to be handled. Ere long they are thrown aside, at a great loss.

I doubt Lincoln was against broadacre farms for any environmental reasons…almost the opposite. A huge farm required more labour and time to manage and harvest, so Lincoln believed it was easier for farmers to produce the largest crop possible from a smaller quantity of ground by ‘pushing’ the soil to its full capacity (much like the modern arguments for high-yield crop intensification).

The next year Lincoln was elected President. Soon afterwards, he signed the first of the Homestead Acts, a key driver of the widespread landscape mismanagement that followed.

Of course, Lincoln would not have intended for any of this to happen. His ideas for agricultural intensification were more likely about improving labour conditions than defeating nature.

On the other side of the Atlantic, Darwin was contributing to agriculture in a different way, unwittingly taking the floor for the land-sharing argument.

One of his lesser-known works was an 1881 book on earthworms and their effect on soil formation and fertility. He published the book after almost 40 years of observations of worm castings in various fields and friends’ backyards. It was ground-breaking…literally. At the time, it outsold Origin of Species, but has since been mostly forgotten outside soil circles.

Like most new ideas, it was rejected by some of Darwin’s peers because it contained more observation and hypothesis than actual ‘evidence’ (not much has changed in science!). But many now consider him the founder of soil ecology. Darwin’s fascinating descriptions of multiple ecological functions, including how worms might have ‘intelligent’ thought, their ability to bury archaeological sites for us to dig up later, and their contribution to soil fertility and landscape evolution are a gold mine for future research projects (you can read the whole text here).

Darwin’s book could have had a profound impact on agricultural history – it showed the importance of soil invertebrates to building soil health and structure, and therefore encouraged ecological field management to support these natural processes (i.e. ecosystem services). But it was overlooked because of the dominant agricultural paradigm of the time, the chemical and physiological approach championed by Justus von Liebig, the father of the fertiliser industry and the Oxo beef-stock cube. Clearly not a man to mess with.

With the benefit of hindsight, we know that Lincoln’s ideal of crop intensification isn’t the best option for agricultural sustainability. Intensification of cultivation and inputs can severely degrade soil and ecological function in the long-term, increase pest loads, and generally reduce yields over time.

Land-sparing may maximise yields and benefit some species in some locations, but is not realistic as a blanket adoption strategy. The reality is far more complex than the dichotomous land-sparing/land-sharing debate gives credit for.

The key to maintaining both Lincoln & Darwin’s legacy is in diversification and agroecological approaches to farming – one acre of mixed, unpatented crops and livestock will yield more long-term value to the farmer, by improving social justice and ecological function, than one acre of one variety of high-yield corn.

In an extremely small area, especially if freely open to immigration, and where the contest between individual and individual must be severe, we always find great diversity in its inhabitants. ~ Darwin, On the Origin of Species

One thought on “Emancipation, Evolution…and Agroecology: Lincoln & Darwin on land-sparing vs. land-sharing”