Last spring, I found a new bee in a tiny urban reserve near my house in Albury. I identified it to genus Megachile, but that was as far as I got. I had never seen anything like it. After some research, and help from local bee enthusiast Karen Retra, we identified it as Megachile semiluctuosa.

I submitted my sighting to the Atlas of Living Australia (ALA), which is the main online, publicly-available database of Australian biodiversity records. My sighting was the first record of M. luctuosa for the Albury region – the nearest recorded sighting was about 200 km north of here.

Yes, I got a bit excited. But this is more likely an indication that few people are out looking for bees, rather than evidence of range expansion. ALA has records of this species from across most Australian states, but nearly 70% of them are from central New South Wales, mostly from a research project conducted by CSIRO researchers.

Despite all these collection records, there is hardly any published information on the ecology of this species. It’s a resin bee, but what plant resins does it prefer? Where does it nest? How long does it live? What flowers does it usually forage on? How does it interact with other bee species? Is it an important pollinator for any particular plant species?

It doesn’t even have a recognised common name (in an uninspired moment, I called it the grey resin bee). Nor could I find a record for its intriguing scientific name. Luctuosa is a Latin word meaning mournful or sad. A variety of species have been so-named, most of them probably because their colouring or behaviour signified grief or sadness.

The European pied flycatcher was originally named Muscicapa luctuosa, apparently after its mournful song. The widow skimmer (Libellula luctuosa) was apparently named for its wings, which appear to be draped in traditional mourning crepe.

The UK’s black-and-white cuckoo bee (Melecta luctuosa) is a cleptoparasite of a (now rare) ground-nesting potter bee. Sadly, M. luctuosa hasn’t been seen in the British Isles for over 100 years and is now considered extinct.

But, back to the grey resin bee. It was named in 1853 by English entomologist Frederick Smith from a specimen in the British Museum collection (Smith named many of the known Australian bees at the time, most of them without ever seeing them in their natural habitat). Semi means ‘half’, so this bee is probably named, rather unimaginatively, for its ‘half-greyness’, or perhaps the half-stripes on the abdomen. Who knows!

Apart from a handful of hits from various species listings, the only clues to the grey resin bee’s ecology come from this 1950 article in The Victorian Naturalist by Tarlton Rayment. Rayment notes that a group of females were found in resinous cells in Acacia aneura (mulga) wood, and another group were found foraging on Eremophila maculata (spotted emu bush), both near Broken Hill in western NSW.

I saw grey resin bees again this spring, in the same spot, which means they are nesting in this tiny urban (and quite degraded!) reserve. There are plenty of dead trees around, most riddled with beetle holes (great for cavity-nesting bees!). I have so far only seen it feeding on the gorgeous purple Hardenbergia, although wattles and various weeds and wildflowers were flowering nearby. A number of box trees were running sap at the time, and the bee I was watching often landed on the bark of these trees, possibly hunting out resins for their nest cells. 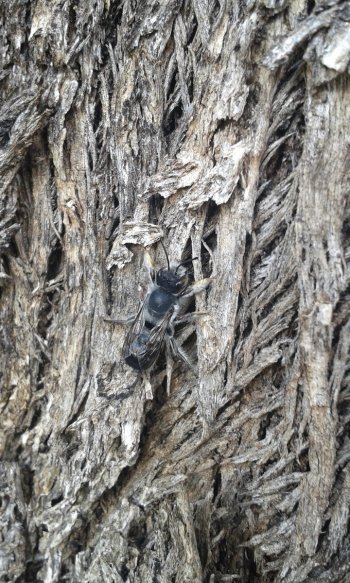 All of this got me thinking about the impact of ‘known unknowns’ on biodiversity and conservation science. We know there are at least 1600 native bee species (likely many more) in Australia. Some of them are popular and well-known to scientists and non-scientists, like the blue-banded bees and the giant carpenter bees. But there are hundreds more species like the grey resin bee – a widespread distribution, such distinctive markings, known to taxonomists and bee collectors for centuries, yet we know so little about its ecology.

We are aware of the millions of undiscovered and unidentified species on Earth. But what about the millions of species we know exist, but don’t know anything about? The ‘known unknowns’ to science. Just naming and documenting them isn’t enough. We need to look out for them and find out their stories.

5 thoughts on “Species that are ‘known unknowns’ to science”