I recently discovered this gorgeous book, loaned to me by a colleague (Elizabeth Hale, who blogs over at Antipodean Odyssey). 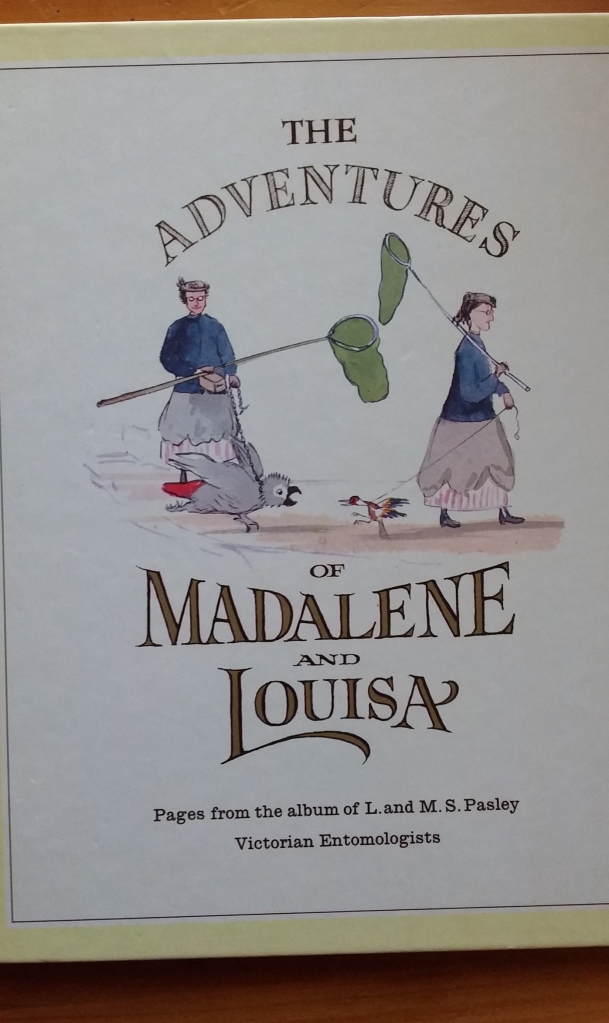 These days, children’s books and popular media often portray insects as scary creepy-crawlies, and the decline in outdoor play and education means many kids rarely encounter an insect that’s not a household pest.

Back in Victorian times, before screentime entertainment, things were a bit different. Victorian entomologists wrote widely on the wonders of insects, from their roles in Shakespeare’s plays to the ecosystem services they provide.

And so did Louisa and Madalene. The girls’ father worked away from home, as Admiral Superintendent of Devonport Dockyard, and a string of governesses were employed to educate the teenage girls at their home near Lake Windermere. The girls’ keen interest in “entomologising” was not looked kindly upon, and most governesses moved on quickly (after much complaining).

I love so many things about this book.

The detail and humour in the girls’ drawings are entrancing, a testament to the girls’ creativity (exhibitions have been held of their work). Madalene wrote other natural history books including A Selection of British Butterflies and Moths published in 1862.

The verb entomologise is just superb. It’s been replaced by much more boring ‘insect collecting’ in modern vocab, so let’s bring it back. The Pasley girls didn’t invent it. I’m not sure when it was first used, but many naturalists (including Charles Darwin) were using it before the girls were born and it appears in numerous natural history publications from the 1800s and early 1900s (e.g. in this alarmingly descriptive Nature paper Termites Kept in Captivity by Ants).

This is literally the first idle day I have had to myself; for on the rainy days I go fishing, on the good ones entomologising.

The metaphors hidden in the drawings are fascinating. I particularly love how the girls draw themselves as tiny people, overshadowed by giant insects. Insects might be small in stature compared to humans, but their importance and impact on our lives makes them worth noticing. Were the girls referring to this? Or were they commenting on the trials and tribulations of entomologising? Many of the pictures suggest Lilliputian humans trying to tame giant wild beasts – moth larvae tied by a rope to a tree, with the caption ‘in captivity’; or the hilarious tale of the ‘rare’ beetle larvae that bursts its way out of the case the girls try to hold it in.

The girls’ were exceptional field ecologists with a keen eye for describing ecological details. I particularly love the illustration of the giant Ichneumonidae wasp legging it after a fleeing hedgehog…ichneumons are often part of hedgehog diets, so the wasps are finally getting their own back!

The oil beetle (Meloe sp.) the girls encounter is cleverly drawn with its body substituted for a barrel of paraffin oil, its head shaped like a tap dispensing the ‘unpleasant smelling oil’ when it’s surprised. Oil beetles are now threatened in the UK, with three species now listed as extinct and only five species still recorded. Oil beetles depend on wild solitary bees to complete their life cycle (they are phoretic predators on certain bee species). So, as the diversity of flowering grasslands declines, so do bees, and so do oil beetles.

The girls’ taxonomic identifications are pretty accurate, but one gorgeous caterpillar is named the ‘unknown larvae’. I don’t know the UK fauna well, but it looks like it could be a Notodontidae species, perhaps the puss moth (Cerura vinula)?

I don’t think this book was ever printed commercially, so you will only be able to find it through libraries or secondhand book sellers. I highly recommend doing so.

But you don’t need the book to be inspired to entomologise! Insects are so much easier to find than vertebrate wildlife, wherever you are, whatever season. Just turn over some leaves, inspect some branches, look for some flowers, search the leaf litter and undergrowth….