A couple of weeks ago I gave a talk at the Insect Ecology Research Chapter workshop at the Ecological Society of Australia’s annual conference in Brisbane. I talked about how policy and popular media influence insect conservation in Australia; as an example, I discussed this research by Toby Smith and me showing how introduced honey bees dominate mainstream media coverage of pollinators in Australia.

I also collated data on which insect species are officially listed as threatened species in Australia. In Australia, we have a national list (under the Commonwealth Environment Protection and Biodiversity Conservation Act 1999) of flora and fauna species that are considered threatened at a national scale. In addition, each individual state and territory has its own threatened species list under various state legislation.

These lists are regulatory and provide a legal basis for initiating conservation programs…but listing doesn’t guarantee that conservation effort and funds will be allocated for a listed species. The lists also need to be taken with caution: if a species is not on the list, it doesn’t mean it’s not under threat. Also, species don’t automatically get listed when we know their populations are declining. The listing process can be long and convoluted, and proposals or recommendations for listing (by individuals or the relevant Threatened Species Committee) don’t automatically translate into an official listing (e.g. find out more about the TS Committee and listing process for New South Wales here).

Despite this, these lists are still great tools to raise awareness of threatened species, and increase public understanding of the drivers that are leading to the threatened listing (e.g. habitat loss). They are also a great way to highlight how insects (and other invertebrates) are often overlooked, in all walks of life.

This is not just entomologists and insect-lovers whingeing – it is a reminder of the limits to our collective knowledge. Insects are one of the most abundant and species-rich taxonomic groups on Earth. You can find insects everywhere, in every kind of habitat. Insects contribute to multiple ecosystem services that keep humans alive, even the so-called ‘pests’ that we love to label as ‘baddies’. So it’s pretty embarrassing that we really don’t know much about most of them, and most people want to kill the ones we do know about.

With this in mind, I was interested to see how Australian insects fared on our threatened species lists (this doesn’t include all invertebrates on the lists…and, if you have a look, there are A LOT of threatened snails!).

Not surprisingly, insect species represent only a tiny proportion of fauna on all lists (total number of species up the Y axis on both graphs). 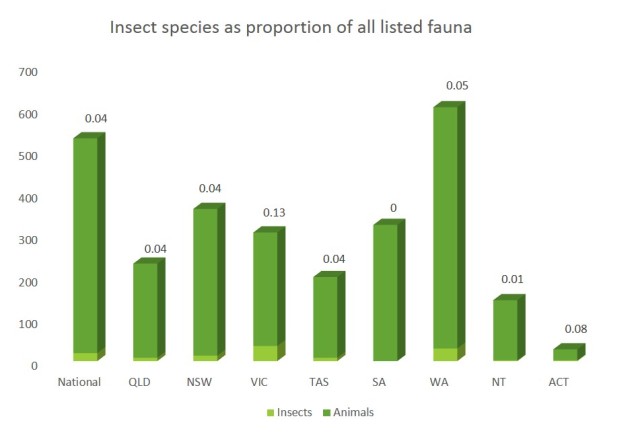 I was more interested in what insect taxa were on the lists. Which insect orders have we focused on when we decide to list a threatened species?

Butterfly and moth species dominate every list, except Western Australia’s, where they seem more fascinated with Orthoptera.

I’ve posted the lists in Google Drive if you’re interested in the species on each list. Remember, the taxa on a threatened species list often represent the taxonomic expertise and recommendation activity for that particular committee, not necessarily knowledge or actual threats facing insect species. For many of the species on these lists, there is very little published knowledge of their ecology and life history.

Why? There are many other insect species not on these lists that we need to get to know: fund research on, protect their habitat, study their interactions. Most of Australia’s insect species are unknown to science (i.e. not even described, so they don’t technically exist)…we don’t even know where they live, how their life cycle turns, what other species they interact with, how many have gone extinct, or how we are impacting their populations.

How do we know if our insect populations are declining, when no one is paying attention to them?