Last weekend, my husband dragged me away from grant-writing for a quick afternoon outing. We headed to Dangars Gorge, about 20 minutes’ drive from Armidale. The gorge is part of the World Heritage Gondwana Rainforests, a protected area we are so lucky to have on our doorstep. Sadly, it’s a bit dry this year. 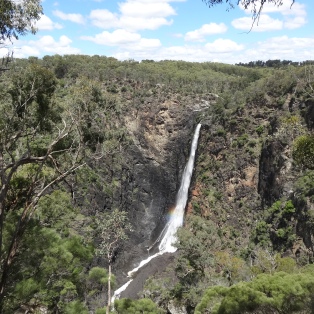 Every time we’ve visited, I’ve hit the ecology observation jackpot: an interesting interaction, a new species record, or a natural history mystery. So I had my camera on hand, just in case. And I didn’t have to look far…

This dead tree trunk was right next to the walking track that takes you to the top of the falls. I noticed lots of holes in the wood as we walked by (a guaranteed sign of insect activity!) so we stopped to have a quick look for occupants.

I saw a distinctive hovering crowd of Gasteruptiidae wasps, a sure sign something was going on. These wasps are pollinators as adults, but their larvae are predators or inquilines in the nests of other bees and wasps. I’ve always been curious about the etymology of their family name: ‘gaster’ is from Latin/Greek for ‘belly’, and is a standard term for the characteristic abdomen of all hymenopterans…does the ‘eruption’ part of the name relate to the distinctively-long ovipositor?

There are around 500 known species of Gasteruptiidae globally, with some groups restricted to Gondwanan distributions. Species are hard to tell apart without an expert on hand, but I think there were at least two species loitering around this trunk. I watched a female scoping out multiple holes, before finding one that she settled near…she walked backwards a few steps to get a good spot and waited, watching the hole until a bee emerged. 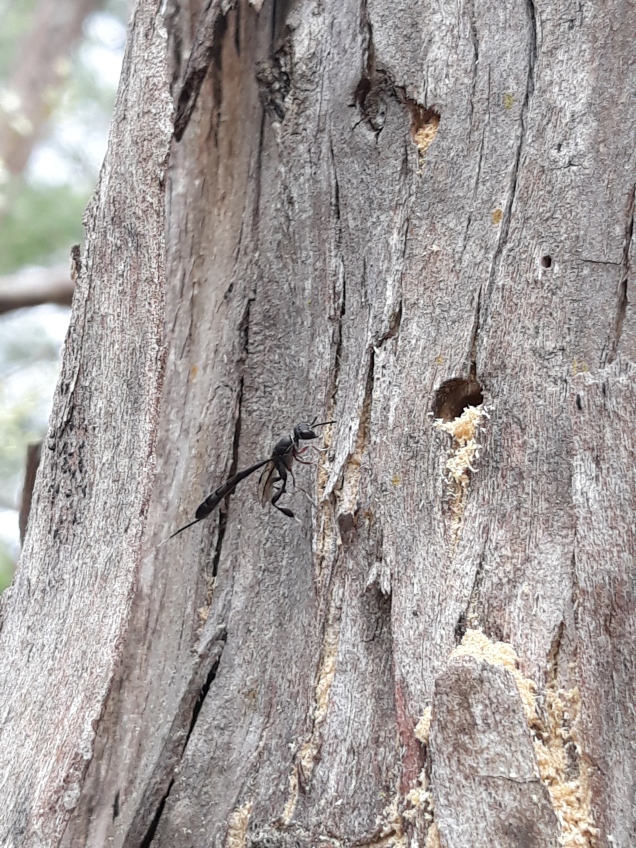 There were many more bees, coming and going out of holes up and down the trunk. Dead wood is vital habitat for many animals, fungi and plants. This particular dead tree was a communal nesting site for a group of masked bees (Amphylaeus spp., not sure which one…taxonomy of Australian bees is still under construction, and there are a couple of species that look similar).

I’d seen these bees before. A few years ago, we had a group of Amphylaeus (males and females) inhabiting the hollow interiors of dead geranium stems in our suburban garden in Albury.

Need an excuse not to prune the geraniums? How about a nest full of native #bees? #wildoz #Ozpollinators #gardening pic.twitter.com/0HvcSr5xzt

But I’d never seen them excavating their own holes before. Over just a few minutes at Dangars, I saw multiple individuals backing fresh sawdust out of different holes in this trunk.

Colletidae bees are generally considered to be solitary – there are only a couple of recent documented reports of communal nesting in this family, but obviously it happens. Because we know so little about the ecology of most bee species, this is a caveat for studies that define ‘sociality’ as a trait based on taxonomic identity. It’s also a reminder that to truly ‘save the bees‘, we need to learn a lot more about the ecology of the ~20,000 species of bee around the world – if we don’t know where they live, or how they live out their life cycle, how can we save them?

The gasteruptiids were hovering, waiting for their chance. I lost count of how many there were. Then suddenly, I saw another sneaky hymenopteran parasitoid! A female Mutillidae wasp darted from one of the holes to hide under some loose bark, as if she’d just been caught red-handed (ID based on brief observation before she disappeared; some Tiphiidae may look similar, and have similar ecology). These wasps are also parasitoids of solitary insects; but their interactions with social or communal species are not commonly recorded. 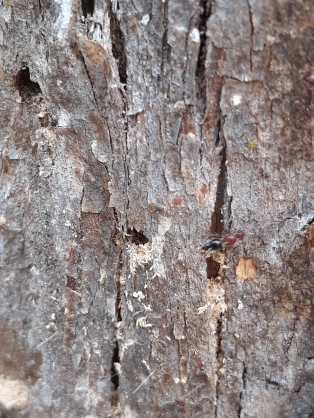 Beyond the truly ‘social’ insects we’re all familiar with, like honey bees, bumble bees, ants and termites, we generally think of insects as ‘solitary’ species. The reality is far more interesting. Ecosystems are built on communities and interactions, not single species or individuals. But we know very little about most of the communities around us. The only way to find out is to get outside and have a look.

One thought on “A community of solitary hymenopterans”