What is a species? This apparently simple question is one of the best ways to get scientists arguing.

A recent article by Henry Taylor, a philosopher at University of Birmingham, asks this question from a philosophical perspective. The article itself is okay. But there is zero chance of biologists adopting its recommendation, ‘to scrap the idea of a species’, any time soon (see also this older article at the same platform, on the same subject, from a biologist’s perspective).

What I found interesting is how different audiences interpreted the article in the comments and on social media. I saw a mix of reactions (based on my network and a few searches; obviously not indicative of everyone) – some scientists were condemning the article vocally and aggressively, while others who didn’t appear to be scientists (based on their Twitter bio), shared the article in agreement and support.

‘What is a species?’ is a classic philosophical question, not a scientific one. Philosophical questions are a valuable tool for life. They are conceptual, not factual; they are rarely ‘solved’ (in the scientific sense); and they need to be addressed with complex thinking, not just facts or empirical research. You don’t have to agree with this approach, it’s just how Philosophy differs from Science. Disciplines are defined by different methodologies, standards, systems, and norms.

END_OF_DOCUMENT_TOKEN_TO_BE_REPLACED

Since then, disreputable papers have made regular appearances in reputable journals. And there are different scales of disreputable. The paper claiming that octopi originated from outer space was clearly far-fetched, while the scholars who recently argued there was a ‘moral panic’ over free-ranging cats simply highlighted how interdisciplinary research is often challenged by opposing methodological approaches (note: I agree with most ecologists that free-ranging cats are not good for wild animals, including insects). END_OF_DOCUMENT_TOKEN_TO_BE_REPLACED

After my blog post earlier this year on the questionable insectageddon review paper, American Scientist invited me to write a perspective article on the media hype surrounding the story.

The review paper has many flaws and caveats (stay tuned for a more thorough treatment of the paper coming soon) and the breathless media hype around it was confused and misleading. But the overall message is valid – our collective actions are impacting ecosystems (including insects) in dangerous ways through forest clearing, pesticide use, fossil fuels, and widespread simplification of landscapes. Some insect species are being seen less frequently in some areas because of this.

However, this message is not new – we already have access to decades of more rigorous evidence showing these effects and how we can mitigate them, so the engagement value of this latest review paper is unclear. Is it worth risking public trust in scientific rigour, just to get a bit more attention for the issue?

You can read my article here: No Simple Answers for Insect Conservation 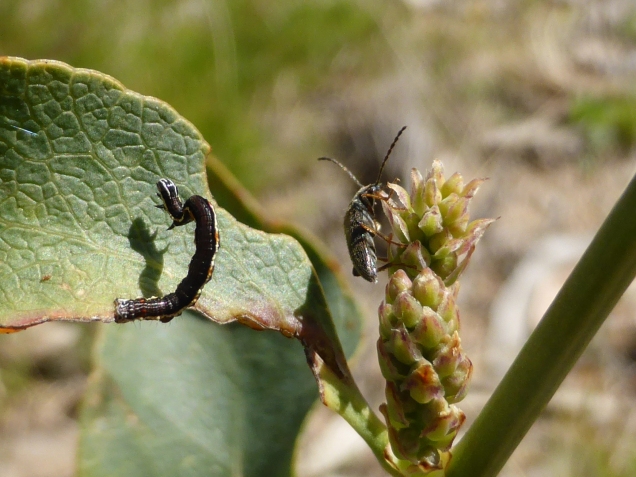 The latest instalment in the Insect Armageddon saga is out. I wasn’t going to write about it. After my previous posts, I didn’t want to sound like a stuck record. But I’ve had a few media requests, some from journalists who found my original blogs. Most journalists I spoke to have been great, and really understand the importance of getting the facts straight. But a few seemed confused when they realised I wasn’t agreeing with the apocalyptic narrative – ‘other scientists are confirming this, so why aren’t you?’

This latest review paper has limitations, just like the German and Puerto Rican studies that received similar hype over the last few years. This doesn’t make any of them ‘bad’ studies, because every single research paper has limitations. No single study can answer everything neatly. Science takes time. END_OF_DOCUMENT_TOKEN_TO_BE_REPLACED

At the end of each year, dictionaries (and other linguistically-minded groups) release their Word of the Year. The metrics used to rate these words vary by organisation, and the methods (if described) are always a bit vague. But the rating usually involves how often the word was searched for on the dictionary’s site, or how often the word was used in popular online media.

Unlike other ‘of the year’ or ‘best’ ratings, Words of the Year are rarely ‘happy place’ words. They’re a measure of contemporary cultural usage, a sign of the times, not a rigorous measure of meaningfulness or popularity.

We often discuss Word of the Year retrospectively – why did it matter so much last year? But, if you don’t like repeating the same mistakes, it also matters for this year and beyond.

My top picks are: END_OF_DOCUMENT_TOKEN_TO_BE_REPLACED

We are suckers for hype. The recent media sequel of the mythical Insect Armageddon and the coverage of the latest WWF report on wildlife declines are a reminder of this.

Global declines in insect populations are a huge concern. Insects contribute to myriad ecosystem services through a multitude of ecological processes and functions. If we lose insects, we WILL suffer. But the two studies media have hyped on this issue are not actually evidence that this happening. They are concerning; they are a wake-up call; they are worrying. But, in and of themselves, they are not evidence of apocalyptic declines in the number of all 1+ million species of insect on Earth.

Similarly, the recent WWF report does not show any evidence that humans have ‘wiped out’ 60% of all animals on Earth in the last 30/40 years, as many media outlets are claiming. The truth: the report considered around 4000 species of mammals, birds, fish, reptiles and amphibians…i.e. vertebrates. There are at least ~400,000 more species of vertebrate on Earth (depending who you talk to), probably more. And huge caveat!… Invertebrates are the most abundant and diverse group of animals, so any claim about ‘all animals’ that doesn’t include invertebrates is automatically dubious. END_OF_DOCUMENT_TOKEN_TO_BE_REPLACED

Have you read a research paper where you experience this sequence of thoughts?: Title/Abstract/Introduction (wow! This is a real problem, someone’s finally answered this question), Methods (um, hang on, this sample size/study system/analysis approach doesn’t quite answer this problem…), Results (okay, these results are interesting, but…), Discussion (whoa, rein it in! I can’t find the link between these assumptions or recommendations and the results…).

The paper may be scientifically sound, as far as the methods & results go. The problem is that the authors have chosen a very broad frame narrative, and then confounded that frame with the interpretation of their results. END_OF_DOCUMENT_TOKEN_TO_BE_REPLACED

Fakenewsflash: the recent Facebook post claiming to be from David Attenborough, suggesting that we should feed floundering bees a sugar solution to ‘save’ them, was faked.

I’m not on Facebook, but I saw the original post via Twitter, where many popular non-profit and government organisations promoted it (it now seems that many have deleted their posts).

I didn’t know it was a fake post at the time, but I didn’t agree with it so didn’t share it or comment on it. I didn’t want to be the Grinch that disagreed with the popular personality. And perhaps the pollinator message would reach a new audience, despite the fake news…

But what price new audiences? END_OF_DOCUMENT_TOKEN_TO_BE_REPLACED

The number of published papers using Altmetrics ‘attention scores’ as a data source to measure impact is rising. According to Google Scholar, there are over 28,000 papers mentioning Altmetrics and impact.

This latest analysis published in PeerJ finds a positive correlation between citation rates and the Altmetric score for papers published in ecology & conservation journals over a 10 year period (2005-2015). This implies: the more a paper gets tweeted, blogged, or talked about in online popular media, the more it will be cited.

This seems commonsense. The more exposure a paper gets online, compared to traditional exposure via journal alerts to the limited number of subscribers, the more people will be aware of it and potentially cite it. This is why we do scicomm. (Although, hopefully people read a paper first and decide on its quality and relevance before citing.) END_OF_DOCUMENT_TOKEN_TO_BE_REPLACED

What do you say when someone outside your work circle asks what you do?

I’ve tried a few different responses, depending how much time I have to explain details. I sometimes think I should say ‘I’m a scientist’…it’s more recognisable, and maybe more ‘legitimate’ to doubters (ecology is a misunderstood discipline), and it makes the point that ecology is a bona fide science. But it’s also ambiguous.

What if the person I’m talking to thinks ‘science’ is just the physical or medical sciences? It gets a bit awkward when I hear back something along the lines of ‘Oh medical research is so important, I’m so glad you’re doing something to help’. When I say I’m an ecologist, it’s equally disheartening how many blank or confused looks I get. END_OF_DOCUMENT_TOKEN_TO_BE_REPLACED

Ecology is not a dirty word
Blog at WordPress.com.
Loading Comments...