We summarise the major flaws in the pop culture ‘insect apocalypse’ narrative and argue that focusing on a hyped global apocalypse narrative distracts us from the more important insect conservation issues that we can tackle right now. Promoting this narrative as fact also sends the wrong message about how science works, and could have huge impacts on public understanding of science.

And, frankly, it’s just depressing. Right now, we all need hope, optimism and reasons to act, not a reason to give up.

This blog isn’t about the paper, you can read it yourself (journal, preprint, or email me for a copy). This is about why we wrote the paper.

If you’re new to the insect apocalypse, see my previous stories on how the narrative evolved and what’s wrong with it: Part 1, Part 2, Part 3, Part 4.

Because science. And ethics.

As scientists and science communicators who work on insects and are passionate about insect conservation, we were frustrated with the uncritical uptake of the narrative after the German and Puerto Rico studies were published. So we wrote a short commentary piece about evidence-based conservation and communication, and submitted it to BioScience in January 2019. Naively, I thought it would be reviewed and published in a couple of months, because the article was a perfect fit for the journal and it was on a very topical issue.

A week later, the famous ‘insect declines’ paper was published, followed by the ensuing media frenzy. The misrepresentation of this single paper as global scientific consensus was disheartening, to say the least. I also knew this meant our paper would either be rejected very soon, or would drag into a long convoluted review process.

It took nearly 12 months, with two major revisions, before our article was accepted and published. This is fine, and I’m glad we can say it’s had a rigorous review. But it was pretty frustrating too, for a short commentary piece that really shouldn’t take that long to review (one reviewer didn’t seem to want it published).

So what’s the problem with the insect declines paper? Isn’t it great that it got people’s attention?

Some people thought that because this paper was getting lots of attention, we were therefore seeing action on insect conservation. But a basic principle of communication is that Awareness is not the same as Engagement or Participation. The last two are where real impact lies. Awareness does not always lead to action, and conservation action that is not evidence-based can do more harm than good, can engage the wrong audiences, or have longer-term effects on public trust in, and understanding of, science.

From a scientific perspective, there is so much wrong with the paper, it really shouldn’t have been published in its current form: the biased search method, the cherry-picked studies, the absence of any real quantitative data to back up the bizarre 40% extinction rate that appears in the abstract (we don’t even have population data for 40% of the world’s insect species), and the errors in the reference list. And it was presented as a ‘comprehensive review’ and a ‘meta-analysis’, even though it is neither.

(There is currently no published comprehensive review of studies measuring insect population trends globally. But there is one in progress, led by Eliza Grames, so keep an eye out for it…it might take a while, as all good systematic reviews should.)

During the first revision, we ‘re-reviewed’ the studies that were underlying this apocalypse hype to identify the variation in trends across studies. And we were really surprised to discover how many of them we had to discard, because they contained no data. But we also were able to quantify the geographic and taxonomic limitations of the evidence behind the hype: only 18 countries (most in Europe and North America) and a handful of species groups in 10 taxonomic orders (note: not all these studies show declines). We used a systematic approach to identify the sampling and analysis methodologies for each of the remaining studies – please do make sure to read the supplementary material if you’re interested in the complexities of insect population trends.

(N.B. I’m not suggesting the authors intentionally set out to publish flawed science. I think the scientists that built and maintained the apocalypse hype had good intentions and genuinely thought they were helping the insect conservation cause.)

Sure, dodgy papers are published in good journals all the time. So what’s the big deal?

Most dodgy papers don’t get this much sustained positive global attention. This paper raced through peer and public gates (only 4 months from submission to publication, and instant global media coverage) with very little critique.

I think it will be a great teaching tool for years to come. It’s also a lesson in how quantity is not synonymous with quality when we talk about research impact – this paper was just announced as number 13 on Altmetrics Top 100 of 2019 list, and already has over 280 citations, many researchers citing it uncritically as evidence of global catastrophe.

Well ok, the data might be flawed, but isn’t it fine to cite this paper as evidence of the drivers contributing to insect decline?

Not really. It is not a comprehensive review of drivers and their mechanisms, and it makes no quantitative assessment to identify which drivers have the most effect on insects (other than a simple vote-counting survey of the cherry-picked studies). There are far more rigorous reviews and research papers that should be cited as evidence of why and how insects are under threat (e.g. here, here, here, here, here, here).

So are you saying that insect declines aren’t a concern? Is this all fake science?

No, definitely not. We disagree with the catastrophic decline narrative, not the concept of population decline or that individual studies have shown declines in some places. Declines are probably happening elsewhere too, but we have no data to prove it. Yet other insects are not declining, and some are increasing in population size or range distribution. New species are being named every year, most of which we still know nothing about. Presenting the global decline narrative as consensus or fact is simply misrepresentation of science. By continuing to promote the narrative, we may suffer from confirmation bias, potentially encouraging scientists to look for evidence of declines in their data where they may be none.

Hence our title. Let’s move on from the decline narrative. We need less hype and more evidence-based action on the priorities we can address right now. Read the paper to find out what some of those are. 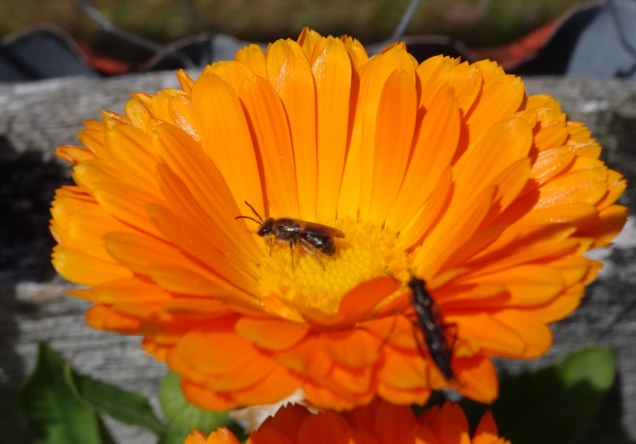